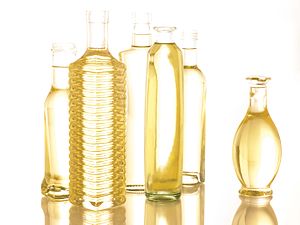 Soybean oil is a vegetable oil extracted from the seeds of the soybean (Glycine max). It is one of the most widely consumed cooking oils. As a drying oil, processed soybean oil is also used as a base for printing inks (soy ink) and oil paints.

Chinese records dating prior to 2000 B.C. mention use of cultivated soybeans to produce edible soy oil.[1] Ancient Chinese literature reveals that soybeans were extensively cultivated and highly valued as a use for the soybean oil production process before written records were kept.[2] 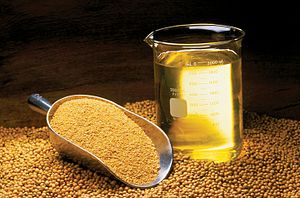 To produce soybean oil, the soybeans are cracked, adjusted for moisture content, heated to between 60 and 88 °C (140–190 °F), rolled into flakes, and solvent-extracted with hexanes. The oil is then refined, blended for different applications, and sometimes hydrogenated. Soybean oils, both liquid and partially hydrogenated are sold as "vegetable oil," or are ingredients in a wide variety of processed foods. Most of the remaining residue (soybean meal) is used as animal feed.

In the 2002–2003 growing season, 30.6 million tons of soybean oil were produced worldwide, constituting about half of worldwide edible vegetable oil production, and thirty percent of all fats and oils produced, including animal fats and oils derived from tropical plants.[3]

The high-proportion of oxidation-prone linolenic acid is undesirable for some uses, such as cooking oils. Three companies, Monsanto Company, DuPont/Bunge, and Asoyia in 2004 introduced low linolenic Roundup Ready soybeans. Hydrogenation may be used to reduce the unsaturation in linolenic acid. The resulting oil is called hydrogenated soybean oil. If the hydrogenation is only partially complete, the oil may contain small amounts of trans fat.

Comparison to other vegetable oils

Soybean oil is mostly used for frying and baking. It is also used as a condiment for salads.

Soybean oil is one of many drying oils, which means that it will slowly harden (due to free-radical based polymerization) upon exposure to air, forming a flexible, transparent, and waterproof solid. Because of this property, it is used in some printing ink and oil paint formulations. However, other oils (such as linseed oil) may be superior for some drying oil applications.

While soybean oil has no direct insect repellent activity, it is used as a fixative to extend the short duration of action of essential oils such as geranium oil in several commercial products.[8][9]

Soybean oil is traded at the Chicago Board of Trade in contracts of 60,000 pounds at a time. Prices are listed in cents and hundredths of a cent per pound.