In the periodic table of the elements, each numbered row is a period.

A period in the periodic table is one of the horizontal rows, all of those elements have the same number of electron shells. Going across a period, each element has one more proton and is less metallic than its predecessor. Arranged this way, groups of elements in the same column have similar chemical and physical properties, reflecting the periodic law. For example, the alkali metals lie in the first column (group 1) and share similar properties, such as high reactivity and the tendency to lose one electron to arrive at a noble-gas electronic configuration. As of 2016 a total of 118 elements have been discovered and confirmed. 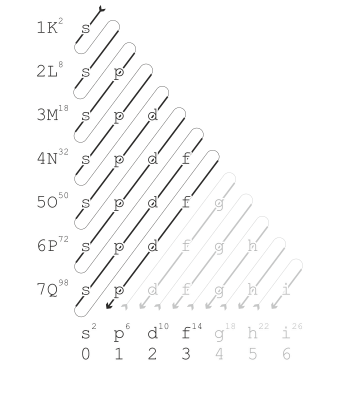 The Madelung energy ordering rule describes the order in which orbitals are arranged by increasing energy according to the Madelung rule. Each diagonal corresponds to a different value of n + l.

Modern quantum mechanics explains these periodic trends in properties in terms of electron shells. As atomic number increases, shells fill with electrons in approximately the order shown at right. The filling of each shell corresponds to a row in the table.

In the s-block and p-block of the periodic table, elements within the same period generally do not exhibit trends and similarities in properties (vertical trends down groups are more significant). However, in the d-block, trends across periods become significant, and in the f-block elements show a high degree of similarity across periods.

Seven periods of elements occur naturally on Earth. For period 8, which includes elements which may be synthesized after 2016, see the extended periodic table.

A group in chemistry means a family of objects with similarities like different families. There are 7 periods, going horizontally across the periodic table.

The first period contains fewer elements than any other, with only two, hydrogen and helium. They therefore do not follow the octet rule. Chemically, helium behaves as a noble gas, and thus is taken to be part of the group 18 elements. However, in terms of its nuclear structure it belongs to the s block, and is therefore sometimes classified as a group 2 element, or simultaneously both 2 and 18. Hydrogen readily loses and gains an electron, and so behaves chemically as both a group 1 and a group 17 element.

Period 2 elements involve the 2s and 2p orbitals. They include the biologically most essential elements besides hydrogen: carbon, nitrogen, and oxygen.

All period three elements occur in nature and have at least one stable isotope. All but the noble gas argon are essential to basic geology and biology.

Period 4 includes the biologically essential elements potassium and calcium, and is the first period in the d-block with the lighter transition metals. These include iron, the heaviest element forged in main-sequence stars and a principal component of the earth, as well as other important metals such as cobalt, nickel, and copper. Almost all have biological roles.

Completing the fourth period are the post-transition metals zinc and gallium, the metalloids germanium and arsenic, and the nonmetals selenium, bromine, and krypton.

Period 5 has the same number of elements as period 4 and follows the same general structure but with one more post transition metal and one fewer nonmetal. Of the three heaviest elements with biological roles, two (molybdenum and iodine) are in this period; tungsten, in period 6, is heavier, along with several of the early lanthanides. Period 5 also includes technetium, the lightest exclusively radioactive element.

Period 6 is the first period to include the f-block, with the lanthanides (also known as the rare earth elements), and includes the heaviest stable elements. Many of these heavy metals are toxic and some are radioactive, but platinum and gold are largely inert.

All elements of period 7 are radioactive. This period contains the heaviest element which occurs naturally on earth, plutonium. All of the subsequent elements in the period have been synthesized artificially. Whilst five of these (from americium to einsteinium) are now available in macroscopic quantities, most are extremely rare, having only been prepared in microgram amounts or less. Some of the later elements have only ever been identified in laboratories in quantities of a few atoms at a time.

Although the rarity of many of these elements means that experimental results are not very extensive, periodic and group trends in behaviour appear to be less well defined for period 7 than for other periods. Whilst francium and radium do show typical properties of groups 1 and 2 respectively, the actinides display a much greater variety of behaviour and oxidation states than the lanthanides. These peculiarities of period 7 may be due to a variety of factors, including a large degree of spin-orbit coupling and relativistic effects, ultimately caused by the very high positive electrical charge from their massive atomic nuclei.