From PeoplesPedia
Jump to: navigation, search
For the county, see Hualien County.

Hualien City (Template:Zh) is a county-controlled city and the county seat of Hualien County, Taiwan. It is located on the east coast of Taiwan on the Pacific Ocean, and has a population of 106,368 inhabitants.[3]

Hualien County annals (花蓮縣志) record that the city was called "Kiray" (Template:Zh) until the early twentieth century. This name refers to the Sakiraya Taiwanese aborigines and their settlement.[4]

After Taiwan came under Japanese rule in 1895 its governors sought to change the name because "Kiray" is pronounced the same as the Japanese word for "dislike" (嫌い, kirai). The name was eventually changed to Karen Harbour (Japanese: 花蓮港, Hepburn: Karenkō). After World War II the incoming Kuomintang-led Republic of China retained the Kanji spelling but shortened the name to just Template:Nihongo4, or Hualien via Chinese romanization.

The Spaniards built mines for gold in Hualien in 1622. Permanent settlements began in 1851, when 2,200 Han Chinese farmers led by Huang A-fong (黃阿鳳) from Taipei arrived at Fengchuan (now the area near Hualien Rear Station). In 1875, more farmers, led by Lin Cang-an (林蒼安) from Yilan, settled at Fengchuan.[citation needed]

Settlements in the area remained small by the start of Japanese rule. The city was expanded circa 1912 by its Japanese governors to incorporate Guohua (Template:Nihongo2) and Guoan (Template:Nihongo2) Villages, a region later known as Old New Port (舊新港街). In 1920, Template:Nihongo4 was established, and around 1923 it was extended to Template:Nihongo4, today known as "New Port" (Template:Zh),[5] including the Guowei and Guoji Villages. In 1940, the town was upgraded to Karenkō City, Karenkō Prefecture.

On 25 October 1945, Taiwan was handed over from Japan to the Republic of China under Kuomintang government. In January 1946, the incoming Kuomintang designated Hualien City (花蓮市) a county-controlled city of Hualien County and to be the county seat, an administrative structure that has remained in place since Taiwan's transition to democracy (1990-1996).

The 45 villages (里) of the city are divided into six village unions (聯合里): (in Hanyu Pinyin)

The newest villages from 2002 are Guosheng, Guoxing, Minxiao, and Minzhu.

Hualien City has 9,000 aboriginal people, making it the city with the largest aboriginal population in Taiwan. The majority of the aborigines that reside in Hualien include the Amis, Atayal, and Bunun.[6] Hualien City is also the most densely populated area in Hualien county.[3] 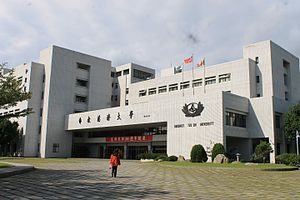 Hualien City is the center of politics, economy and transportation of Hualien County. Hualien City is the center of import and export trading due to its strategic location within the county and its proximity to airport and major harbor. It also has rich tourism industries, ranging from tourist objects, accommodations etc. One of its ingenious industry is the local stone art cultural industry. 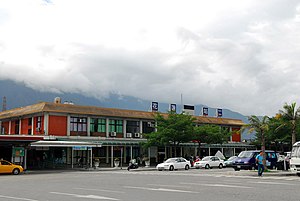 Hualien City is served by Hualien Airport located at the neighboring Xincheng Township of Hualien County. The airport is about 10 minutes drive to the city.

The Port of Hualien is an international port in the city with liners sailing to Japan, Middle East, South East Asia and South Korea.