The Falcon Heavy Demonstration Mission (also known as the Falcon Heavy Test Flight or Falcon Heavy Maiden Flight) was the first attempt by SpaceX to launch a Falcon Heavy rocket, on 6 February 2018 at 20:45 UTC.[1] The launch introduced the most powerful rocket currently in operation,[2] producing 5 million pounds of thrust and having more than twice the lift capacity of the NASA space shuttle.[3]

The mission was the test flight of the Falcon Heavy launcher, intended to demonstrate the capability of the launcher while gathering telemetry throughout the flight. 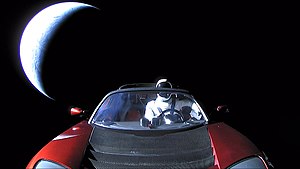 The dummy payload for this test flight was a sports car owned by SpaceX CEO Elon Musk, a midnight cherry, first generation Tesla Roadster. SpaceX stated that the payload had to be "something fun and without irreplaceable sentimental value".[1] Sitting in the driver's seat of the Roadster is "Starman", a dummy astronaut clad in a SpaceX spacesuit.[4]

The Falcon Heavy maiden flight was intended to accomplish several objectives: to successfully return the two side booster cores to Cape Canaveral and land them simultaneously at Landing Zones 1 and 2, and land the central first stage booster core on an autonomous spaceport drone ship, the Of Course I Still Love You, in the Atlantic Ocean. The rocket used first stage Falcon 9 rockets for its three booster cores and a Falcon 9 upper stage.[3][4][5] The purpose of including the Roadster on the maiden flight is to demonstrate that the Falcon Heavy can launch payloads as far as the orbit of Mars.

The launch occurred at 3:45 PM EST, or 20:45 UTC, from Launchpad 39A at Kennedy Space Center at Cape Canaveral, Florida; the Roadster was successfully placed in its orbit, and its two booster cores returned to land at Landing Zones 1 and 2 several minutes later. The sole objective not completed was the landing of the central core; while its fate was initially ambiguous due to signal loss and heavy smoke, Musk confirmed several hours after the launch that the booster had not survived the recovery attempt.[6] Because two of the three engines necessary to land were unable to reignite, the booster hit the water at 500 kilometres per hour, 100 metres away from the drone ship.[7] While upper stage flight is continued, during the transfer burn to solar orbit, the second stage overshot the orbit of Mars. It is predicted that the Roadster will stay in an orbit with a perihelion at Earth orbit and an aphelion near the orbit of the dwarf planet Ceres in the Asteroid Belt.[8][9][10]

The planned mission timeline is (all times approximate):[1] 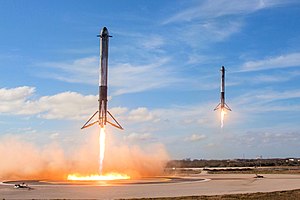 Valuable telemetry data on the performance of the launch system and its components were obtained for all stages of the test flight.

The dummy payload was placed in a heliocentric orbit, with an aphelion of 1.70 AU[11], beyond Mars and approaching Ceres. The first four hours of the flight were livestreamed on YouTube.[8]

Both boosters successfully landed simultaneously on the ground at Landing Zones 1 and 2.

The central core attempted to return to the autonomous spaceport drone ship Of Course I Still Love You but failed to light two of the three engines during the landing burn. The core crashed into the ocean 100 metres (300 ft) away from the drone ship at 500 kilometres per hour (300 mph), causing damage to two of the drone ship's station-keeping thrusters. According to Elon Musk on the post-flight conference, the center core ran out of triethylaluminum-triethylborane (TEA-TEB) igniter fluid.[12]