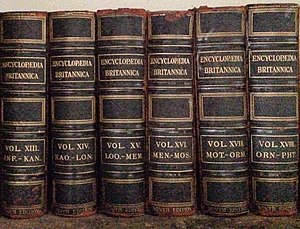 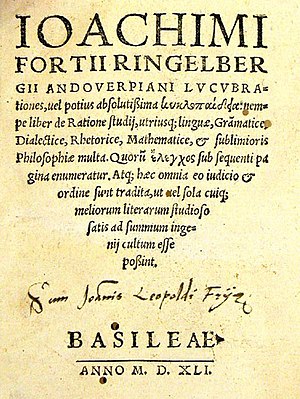 Title page of "Lucubrationes..." 1541 edition, the first book to use the word encyclopedia in the title

This article is about the type of reference work. For other uses, see Encyclopedia (disambiguation).

Title page of "Lucubrationes..." 1541 edition, the first book to use the word encyclopedia in the title An encyclopedia or encyclopaedia is a reference work or compendium providing summaries of information from either all branches of knowledge or from a particular field or discipline.[1] Encyclopedias are divided into articles or entries that are often arranged alphabetically by article name[2] and sometimes by thematic categories. Encyclopedia entries are longer and more detailed than those in most dictionaries.[2] Generally speaking, unlike dictionary entries which focus on linguistic information about words, such as their meaning, pronunciation, use, and grammatical forms, encyclopedia articles focus on factual information concerning the subject named in the article’s title.[3][4][5][6] Encyclopedias have existed for around 2,000 years and have evolved considerably since that time as to language (written in a major international or a vernacular language), size (few or many volumes), intent (presentation of a global or a limited range of knowledge), cultural perceptions (authoritative, ideological, didactic, utilitarian), authorship (qualifications, style), readership (education level, background, interests, capabilities), and the technologies available for their production and distribution (hand-written manuscripts, small or large print runs, internet production). As a valued source of reliable information compiled by experts, printed versions found a prominent place in libraries, schools and other educational institutions. The appearance of digital and open-source versions in the 20th century has vastly expanded the accessibility, authorship, readership, and variety of encyclopedia entries and called into question the idea of what an encyclopedia is and the relevance of applying to such dynamic productions the traditional criteria for assembling and evaluating print encyclopedias.

Indeed, the purpose of an encyclopedia is to collect knowledge disseminated around the globe; to set forth its general system to the men with whom we live, and transmit it to those who will come after us, so that the work of preceding centuries will not become useless to the centuries to come; and so that our offspring, becoming better instructed, will at the same time become more virtuous and happy, and that we should not die without having rendered a service to the human race in the future years to come.|Denis Diderot Denis Diderot and Jean le Rond d'Alembert Encyclopédie. University of Michigan Library:Scholarly Publishing Office and DLXS. Retrieved on: November 17, 2007

The word encyclopedia comes from the Koine Greek ἐγκύκλιος παιδεία,[1] transliterated enkyklios paideia, meaning "general education" from enkyklios (ἐγκύκλιος), meaning "circular, recurrent, required regularly, general"[2] and paideia (παιδεία), meaning "education, rearing of a child";[3] it was reduced to a single word due to an error[4] by copyists of Latin manuscripts. Together, the phrase literally translates as "complete instruction" or "complete knowledge".

Copyists of Latin manuscripts took this phrase to be a single Greek word, enkyklopaidia, with the same meaning, and this spurious Greek word became the New Latin word "encyclopaedia", which in turn came into English. Though the notion of a compendium of knowledge dates back thousands of years, the term was first used in the title of a book in 1517 by Johannes Aventinus: Encyclopedia orbisque doctrinarum, hoc est omnium artium, scientiarum, ipsius philosophiae index ac divisio, and in 1538 by Joachimus Fortius Ringelbergius, Lucubrationes vel potius absolutissima kyklopaideia.

Title page of Skalich's Encyclopaedia, seu orbis disciplinarum, tam sacrarum quam prophanarum, epistemon from 1559, first to use the word encyclopaedia as a noun in the title

The word encyclopaedia was first used as a noun in the title of his book by the Croatian encyclopedist Pavao Skalić in his Encyclopaedia seu orbis disciplinarum tam sacrarum quam prophanarum epistemon (Encyclopaedia, or Knowledge of the World of Disciplines, Basel, 1559). One of the oldest vernacular uses was by François Rabelais in his Pantagruel in 1532 conference Proceedings of the Second Comers Congress, Groningen, 1 – July 4, 1996|year=1997|publisher=BRILL|pages=213|title=Compilation as Theme and Praxis in Franciscan Universal Chronicles|ISBN=90-04-10830-0|editor=Peter Binkley book Pliny's Catalogue of Culture: Art and Empire in the Natural History page=17, chapter Two Strategies of Encyclopaedism|year=2003|publisher=Oxford University Press|isbn=0-19-925913- Several encyclopedias have names that include the suffix -p(a)edia, e.g., Banglapedia (on matters relevant for Bangladesh).