Entrepreneur Elon Musk's first generation Tesla Roadster is an electric car that was selected by him as "something fun and without irreplaceable sentimental value" to be launched into space on the maiden demonstration flight of the Falcon Heavy rocket.[2][3] It was launched on February 6, 2018 as part of the dummy payload. The car and rocket were both manufactured by companies founded and directed by Musk: the car was built by Tesla while the rocket was built by SpaceX. Musk's Roadster is the first consumer car sent into space, it had previously been used by Musk to commute to work around Los Angeles.[3]

It was launched with sufficient velocity to escape the Earth and enter an elliptic orbit around the Sun that crosses the orbit of Mars, reaching an aphelion (maximum distance from the Sun) of 1.67 AU.[4] During the early portion of its voyage it functioned as a broadcast device, sending live video back to Earth for four hours.[5] 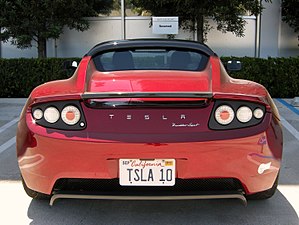 The purpose of including the Roadster on the maiden flight was to demonstrate that the Falcon Heavy can launch payloads as far as the orbit of Mars. Because of the risk involved with the launch of the new rocket, Musk stated that he intended to launch the "silliest thing we can imagine" on the new rocket. The exact payload was not known until the Roadster announcement.[6][7] Initially, there were conflicting reports whether the Roadster payload was fictitious, but Musk and many SpaceX employees later confirmed that the payload was legitimate.[8] On December 22, Musk published pictures of the car taken before payload encapsulation. The automobile was installed at an inclined position above the payload adapter in order to account for the mass distribution.[9]

A license for the launch was issued by the US Office of Commercial Space Transportation on February 2, 2018.[10]

This launcher demonstration makes the Roadster the first consumer car sent into space.[11] Three manned rovers were sent to space on the Apollo 15, 16, and 17 missions in the 1970s and these vehicles were left on the Moon.[12] The Roadster is one of two formerly manned vehicles (albeit not a manned space vehicle) derelict in solar orbit, joining LM-4 Snoopy, Apollo 10's lunar module ascent stage.[13][14]

The first-generation Tesla Roadster is an all-electric sports car. Tesla delivered approximately 2,450 Roadsters worldwide between February 2008 and December 2012. The midnight cherry Roadster launched into space is one of Elon Musk's privately owned vehicles.[15][16] Musk said in a 2012 interview that the Roadster was "the one I drive to work".[3] 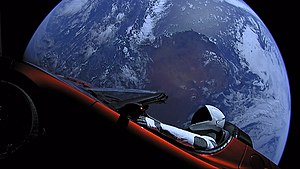 The Roadster in space. "I like the absurdity of that." —Elon Musk[17]

A number of symbolic and whimsical objects were put in the Roadster. Positioned in the driver's seat is "Starman", a full-scale human dummy clad in SpaceX's pressure spacesuit.[18] He has his right hand on the steering wheel and left elbow resting on the open window sill. Starman is named for the David Bowie song "Starman".[19] The car's sound system was looping the Bowie songs "Space Oddity" and "Life on Mars?";[20] even though no human can hear sound in space,[21][22] the symbolism is palpable.[23]

There is a copy of Douglas Adams' 1979 novel The Hitchhiker's Guide to the Galaxy in the glovebox, along with a towel (a reference to the book) and a sign on the dashboard that reads "Don't Panic!" (another reference to the book).[24][25] The payload also includes a Hot Wheels miniature Roadster with a miniature Starman, a plaque bearing the names of the employees who worked on the project, a message on the vehicle's circuit board stating that it was "Made on Earth by humans",[26] and a copy of Isaac Asimov's Foundation series[27][28] on a laser optical quartz storage device (Arch 5D disk) created by the Arch Mission Foundation.[29]

The car was launched aboard a Falcon Heavy rocket from Historic Launch Complex 39A at Kennedy Space Center[10] at 15:45 EST (20:45 UTC) on February 6, 2018,[30] putting the dummy payload into Earth orbit for an eventual elliptical orbit around the Sun.[4]

Following the successful launch, the payload was given the USSPACECOM Satellite Catalog Number of 43205 with a description of "Tesla Roadster/Falcon SH" along with the International Designator of 2018-017A.

Final image from the Roadster

In the hours after the successful Falcon Heavy launch, a live video feed of the Roadster and Starman from three cameras mounted inside and on booms attached to the outside of the vehicle was broadcast on YouTube. It was expected to last for about twelve hours until the on-board batteries were depleted; however, the livestream lasted for just over four hours.[5]

Its elliptical orbit goes out to 1.67 AUs from the sun in November 2018 just outside Mars' orbit

The car was launched into an elliptical orbit around the Sun that will cross the orbit of Mars and reach a distance of 1.70 AU from the Sun.[4] The trajectory was not designed to intercept Mars, so the car will not fly by Mars nor enter an orbit around Mars.[35]

Even if the launch targeted an actual Mars transfer orbit, neither the car nor the Falcon Heavy upper stage is designed to function in deep space, lacking the propulsion, maneuvering, power, and communications capabilities required to operate in interplanetary space or enter Mars' orbit. The purpose of launching the Roadster into this heliocentric orbit is to demonstrate that the Falcon Heavy can launch payloads that could reach Mars.[35]

According to Musk, the car could stay drifting in space for a billion years. According to William Carroll, a chemist at Indiana University, over time it is expected that the Roadster will steadily sustain structural damage from solar radiation, cosmic radiation, and micrometeoroid impacts. Organic material, i.e. any material with carbon–carbon bonds, including carbon fiber parts, will eventually break apart due to radiation. Tires, paint, plastic and leather might last only about a year. The carbon fiber parts will last considerably longer. Eventually only the aluminum frame, inert metals and glass not shattered by meteoroids will remain.[36]