From PeoplesPedia
Jump to: navigation, search
This article is about an additional full moon that appears in a subdivision of a year. For other uses, see Blue Moon (disambiguation).

A blue moon is an additional full moon that appears in a subdivision of a year: either the third of four full moons in a season, or a second full moon in a month of the common calendar.

The phrase has nothing to do with the actual color of the moon, although a literal "blue moon" (the moon appearing with a tinge of blue) may occur in certain atmospheric conditions: e.g., if volcanic eruptions or fires leave particles in the atmosphere of just the right size to preferentially scatter red light.[1]

The term has traditionally referred to an "extra" full moon, where a year which normally has 12 full moons has 13 instead. The "blue moon" reference is applied to the third full moon in a season with four full moons,[2] thus correcting the timing of the last month of a season that would have otherwise been expected too early. This happens every two to three years (seven times in the Metonic cycle of 19 years).[3] The March 1946 issue of Sky & Telescope misinterpreted the traditional definition, which led to the modern colloquial misunderstanding that a blue moon is a second full moon in a single solar calendar month with no seasonal link.

Owing to the rarity of a blue moon, the term "blue moon" is used colloquially to mean a rare event, as in the phrase "once in a blue moon".[4][5]

One lunation (an average lunar cycle) is 29.53 days. There are about 365.24 days in a tropical year. Therefore, about 12.37 lunations (365.24 days divided by 29.53 days) occur in a tropical year. In the widely used Gregorian calendar, there are 12 months (the word month is derived from moon[6]) in a year, and normally there is one full moon each month. Each calendar year contains roughly 11 days more than the number of days in 12 lunar cycles. The extra days accumulate, so every two or three years (seven times in the 19-year Metonic cycle), there is an extra full moon. The extra full moon necessarily falls in one of the four seasons, giving that season four full moons instead of the usual three, and, hence, a blue moon.

Origin of the term 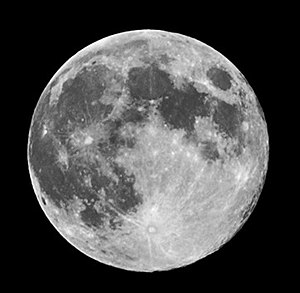 The suggestion has been made that the term "blue moon" for "intercalary month" arose by folk etymology, the "blue" replacing the no-longer-understood belewe, 'to betray'. The original meaning would then have been "betrayer moon", referring to a full moon that would "normally" (in years without an intercalary month) be the full moon of spring, while in an intercalary year, it was "traitorous" in the sense that people would have had to continue fasting for another month in accordance with the season of Lent.[8][9]

The earliest recorded English usage of the term blue moon is found in an anti-clerical pamphlet (attacking the Roman clergy, and cardinal Thomas Wolsey in particular) by two converted Greenwich friars, William Roy and Jerome Barlow, published in 1528 under the title Rede me and be nott wrothe, for I say no thynge but trothe. The relevant passage reads:[10]

O churche men are wyly foxes [...] Yf they say the mone is blewe / We must beleve that it is true / Admittynge their interpretacion.[11]

It is not clear from the context that this refers to intercalation; the context of the passage is a dialogue between two priest's servants, spoken by the character "Jeffrey" (a brefe dialoge betwene two preste's servauntis, named Watkyn and Ieffraye). The intention may simply be that Jeffrey makes an absurd statement, "the moon is blue", to make the point that priests require laymen to believe in statements even if they are patently false. But in the above interpretation of "betrayer moon", Jeffrey may also be saying that it is up to the priests to say when Lent will be delayed, by announcing "blue moons" which laymen have no means to verify.

In the 19th and early 20th centuries, the Maine Farmers' Almanac listed blue moon dates for farmers. These correspond to the third full moon in a quarter of the year when there were four full moons (normally a quarter year has three full moons). Full moon names were given to each lunation in a season. The seasons used were those of the mean tropical year, equal in length, as opposed to the astronomical seasons which vary in length because the earth's speed in its orbit round the sun is not uniform.

The March 1946 Sky and Telescope article "Once in a Blue Moon" by James Hugh Pruett misinterpreted the 1937 Maine Farmers' Almanac. "Seven times in 19 years there were – and still are – 13 full moons in a year. This gives 11 months with one full moon each and one with two. This second in a month, so I interpret it, was called Blue Moon." Widespread adoption of the definition of a "blue moon" as the second full moon in a month followed its use on the popular radio program StarDate on January 31, 1980[2] and in a question in the Trivial Pursuit game in 1986.[5]

The most literal meaning of blue moon is when the moon (not necessarily a full moon) appears to a casual observer to be unusually bluish, which is a rare event. The effect can be caused by smoke or dust particles in the atmosphere, as has happened after forest fires in Sweden and Canada in 1950 and 1951,[12] and after the eruption of Krakatoa in 1883, which caused the moon to appear blue for nearly two years. Other less potent volcanoes have also turned the moon blue. People saw blue moons in 1983 after the eruption of the El Chichón volcano in Mexico, and there are reports of blue moons caused by Mount St. Helens in 1980 and Mount Pinatubo in 1991.[13] In the Antarctic diary of Robert Falcon Scott for July 11, 1911 his entry says, "... the air thick with snow, and the moon a vague blue".[14] On that date the moon phase would have looked full.

On September 23, 1950, several muskeg fires that had been smoldering for several years in Alberta, Canada, suddenly blew up into major—and very smoky—fires. Winds carried the smoke eastward and southward with unusual speed, and the conditions of the fire produced large quantities of oily droplets of just the right size (about 1 micrometre in diameter) to scatter red and yellow light. Wherever the smoke cleared enough so that the sun was visible, it was lavender or blue. Ontario, Canada, and much of the east coast of the United States were affected by the following day, and two days later, observers in Britain reported an indigo sun in smoke-dimmed skies, followed by an equally blue moon that evening.[13]

The key to a blue moon is having lots of particles slightly wider than the wavelength of red light (0.7 micrometer)—and no other sizes present. It is rare, but volcanoes sometimes produce such clouds, as do forest fires. Ash and dust clouds thrown into the atmosphere by fires and storms usually contain a mixture of particles with a wide range of sizes, with most smaller than 1 micrometer, and they tend to scatter blue light. This kind of cloud makes the moon turn red; thus red moons are far more common than blue moons.[15]

The following blue moons occur between 2009 and 2021. These dates use UTC as the timezone; exact dates vary with different timezones.

Using the Maine Farmers' Almanac definition of blue moon (meaning the third full moon in a season of four full moons, but referenced to astronomical rather than equal seasons), blue moons have occurred or will occur on:

Unlike the astronomical seasonal definition, these dates are dependent on the Gregorian calendar and time zones.

Blue moons have been referenced in popular culture.

"Blue Moon" is a popular music standard, written by Richard Rodgers and Lorenz Hart in 1934,[17] and one of the best known football chants,[18] used since the '90s by Manchester City and Crewe Alexandra.[19] "Once in a Very Blue Moon" is a song written by Patrick Alger, recorded by Nanci Griffith, and released on her 1984 LP of the same name. "New Blue Moon", released in 1990, was a song written and recorded by the Traveling Wilburys. There are more modern songs, like Beck's 2014 "Blue Moon."[17][20] South Korean rock band CN Blue named their 2013-2014 concert tour "Blue Moon World Tour.".[21] "Blue Moon of Kentucky" is a bluegrass standard, written in 1946 by Bill Monroe.

The Moon Is Blue, a 1953 movie starring William Holden, was nominated for three Oscars.[24] Blue Moon Investigations is the name of the detective agency in the TV series Moonlighting starring Cybill Shepherd and Bruce Willis.[25] A Blue Moon appears as a significant element in the 2011 film The Smurfs,[26] and the Wikipedia page on Blue Moon is viewed in the movie. The Smurfs TV show also featured the blue moon in an episode.[27] The theme song for The Sopranos, "Woke Up This Morning" by Alabama 3, references "a blue moon in your eyes" in its lyrics. "Once in a Blue Moon" is also the name of an episode of TV show Charmed, which involves the three witches being affected by the blue moon magically, and turning into monsters.[28]

Blue moon is the name of a country in Nintendo's Advance Wars series.