Churyumov–Gerasimenko was discovered in 1969 by Klim Ivanovich Churyumov of the Kiev University's Astronomical Observatory,[26] who examined a photograph that had been exposed for comet Comas Solà by Svetlana Ivanovna Gerasimenko on 11 September 1969 at the Alma-Ata Astrophysical Institute, near Alma-Ata (now Almaty), the then-capital city of Kazakh Soviet Socialist Republic, Soviet Union. Churyumov found a cometary object near the edge of the plate, but assumed that this was comet Comas Solà.[27]

After returning to his home institute in Kiev, Churyumov examined all the photographic plates more closely. On 22 October, about a month after the photograph was taken, he discovered that the object could not be Comas Solà, because it was about 1.8 degrees off the expected position. Further scrutiny produced a faint image of Comas Solà at its expected position on the plate, thus proving the other object to be a different body.[27]

The two-lobe shape of the comet is the result of a gentle, low-velocity collision of two objects. The "terraces", layers of the interior of the comet that have been exposed by partial stripping of outer layers during its existence, are oriented in different directions in the two lobes, indicating that two objects fused to form Churyumov–Gerasimenko.[29][30]

Features described as gates, twin prominences on the surface so named for their appearance,(unclear) have received names by the Rosetta Science Working Team. They are named after deceased members of the Rosetta team.[35]

During Rosetta's lifetime, many changes were observed on the comet's surface, particularly when the comet was close to perihelion.[36][37][38] These changes included evolving patterns of circular shapes in smooth terrains that at some point grew in size by a few meters per day.[39][40] A fracture in the neck region was also observed to grow in size; boulders tens of meters wide were displaced, sometimes travelling more than 100 meters; and patches of the ground were removed to expose new features. A number of collapsing cliffs have also been observed. One notable example in December 2010 was captured by Rosetta's NAVCAM as a bright patch of light shining from the comet. Rosetta scientists determined that a large cliff had collapsed, making it the first landslide on a comet known to be associated with an outburst of activity.[41][42]

This animation consists of 86 images acquired by Rosetta's NavCam as it approached 67P in August 2014.

Like the other comets of the Jupiter family, Churyumov–Gerasimenko probably originated in the Kuiper belt and was ejected towards the interior of the Solar System, where later encounters with Jupiter successively changed its orbit.

Churyumov–Gerasimenko was the destination of the Rosetta mission, launched in 2004, which rendezvoused with it in 2014 and was the first mission to land a space probe on a comet.

As preparation for the Rosetta mission, Hubble Space Telescope pictures taken on 12 March 2003 were closely analysed. An overall 3D model was constructed and computer-generated images were created.[46]

On 25 April 2012, the most detailed observations until that time were taken with the 2-metre Faulkes Telescope by N. Howes, G. Sostero and E. Guido while it was at its aphelion.[citation needed]

Descent of a small lander occurred on 12 November 2014. Philae is a 100 kg (220 lb) robotic probe that set down on the surface with landing gear.[17][53] The landing site has been christened Agilkia in honour of Agilkia Island, where the temples of Philae Island were relocated after the construction of the Aswan Dam flooded the island.[54] The acceleration due to gravity on the surface of Churyumov–Gerasimenko has been estimated for simulation purposes at 10−3 m/s2,[55] or about one ten-thousandth of that on Earth.

Because of its low relative mass, landing on the comet involved certain technical considerations to keep Philae anchored. The probe contains an array of mechanisms designed to manage Churyumov–Gerasimenko's low gravity, including a cold gas thruster, harpoons, landing-leg-mounted ice screws, and a flywheel to keep it oriented during its descent.[56][57][58] During the event, the thruster and the harpoons failed to operate, and the ice screws did not gain a grip. The lander bounced twice and only came to rest when it made contact with the surface for the third time,[59] two hours after first contact.[60]

Contact with Philae was lost on 15 November 2014 because of dropping battery power. The European Space Operations Centre briefly reestablished communications on 14 June 2015 and reported a healthy spacecraft but communications were lost again soon after.[61] On 2 September 2016, Philae was located in photographs taken by the Rosetta orbiter. It had come to rest in a crack with only its body and two legs visible. While the discovery solves the question of the lander's disposition, it also allows project scientists to properly contextualise the data it returned from the comet's surface.[62] 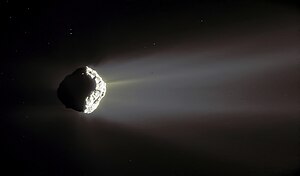 The composition of water vapor from Churyumov–Gerasimenko, as determined by the Rosetta spacecraft, is substantially different from that found on Earth. The ratio of deuterium to hydrogen in the water from the comet was determined to be three times that found for terrestrial water. This makes it unlikely that water found on Earth came from comets such as Churyumov–Gerasimenko.[8][63][64] On 22 January 2015, NASA reported that, between June and August 2014, the comet released increasing amounts of water vapor, up to tenfold as much.[65] On 23 January 2015, the journal Science published a special issue of scientific studies related to the comet.[66]

Measurements carried out before Philae's batteries failed indicate that the dust layer could be as much as 20 cm (7.9 in) thick. Beneath that is hard ice, or a mixture of ice and dust. Porosity appears to increase toward the center of the comet.[67]

The nucleus of Churyumov–Gerasimenko was found to have no magnetic field of its own after measurements were taken during Philae's descent and landing by its ROMAP instrument and Rosetta's RPC-MAG instrument. This suggests that magnetism may not have played a role in the early formation of the Solar System, as had previously been hypothesized.[68][69]

The ALICE spectrograph on Rosetta determined that electrons (within 1 km (0.6 mi) above the comet nucleus) produced from photoionization of water molecules by solar radiation, and not photons from the Sun as thought earlier, are responsible for the degradation of water and carbon dioxide molecules released from the comet nucleus into its coma.[70][71] Also, active pits, related to sinkhole collapses and possibly associated with outbursts are present on the comet.[72][73]

Measurements by the COSAC and Ptolemy instruments on the Philae's lander revealed sixteen organic compounds, four of which were seen for the first time on a comet, including acetamide, acetone, methyl isocyanate and propionaldehyde.[74][75][76] Astrobiologists Chandra Wickramasinghe and Max Wallis stated that some of the physical features detected on the comet's surface by Rosetta and Philae, such as its organic-rich crust, could be explained by the presence of extraterrestrial microorganisms.[77][78] Rosetta program scientists dismissed the claim as "pure speculation".[79] Carbon-rich compounds are common in the Solar System. Neither Rosetta nor Philae is equipped to search for direct evidence of organisms.[77] The only amino acid detected thus far on the comet is glycine, along with precursor molecules methylamine and ethylamine.[80]

Solid organic compounds were also found in the dust particles emitted by the comet; the carbon in this organic material is bound in "very large macromolecular compounds", analogous to the insoluble organic matter in carbonaceous chondrite meteorites. Scientists think that the observed cometary carbonaceous solid matter could have the same origin as the meteoritic insoluble organic matter, but suffered less modification before or after being incorporated into the comet.[81]

One of the most outstanding discoveries of the mission so far is the detection of large amounts of free molecular oxygen (Template:Chem2) gas surrounding the comet. Current solar system models suggest the molecular oxygen should have disappeared by the time 67P was created, about 4.6 billion years ago in a violent and hot process that would have caused the oxygen to react with hydrogen and form water.[82][83] Molecular oxygen has never before been detected in cometary comas. In situ measurements indicate that the Template:Chem2/Template:Chem2 ratio is isotropic in the coma and does not change systematically with heliocentric distance, suggesting that primordial Template:Chem2 was incorporated into the nucleus during the comet's formation.[82] Detection of molecular nitrogen (Template:Chem2) in the comet suggests that its cometary grains formed in low-temperature conditions below 30 K (−243.2 °C; −405.7 °F).[84]