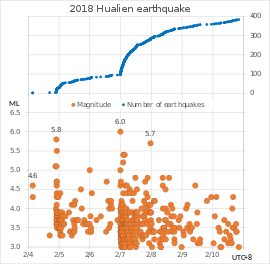 At 23:50 local time on 6 February 2018, an earthquake of magnitude 6.4 on the moment magnitude scale hit Taiwan.[2] The epicenter was on the coastline near Hualien, which was the most severely affected area with a maximum felt intensity of VII (very strong) on the Mercalli intensity scale.[1] At least 11 deaths have been reported, with more than 274 injured.[3]

Taiwan has a history of many strong earthquakes.[1][4] The island is located within a complex zone of continental collision between the Philippine Sea Plate and Eurasian Plate. At the location of the earthquake, these plates converge at a rate of 75 mm per year.

The earthquake formed the largest of a sequence of events that have affected the area over a period of days, with 9 foreshocks of M 4.6 and greater, starting on 4 February with an M 4.8 earthquake and including an M 6.1 event, also on 4 February, within a few kilometres of the 6 February event.[1] The 6 February earthquake was a result of oblique-slip faulting.[1]

The earthquake occurred on the second anniversary of the 2016 Taiwan earthquake in Tainan that had killed 117 people.[5]

The earthquake was followed by a series of aftershocks, with the largest being an M 5.7 event on 7 February at 23:21 local time, 19 km northeast of Hualien city, which reached a maximum intensity of VI (strong).[6] 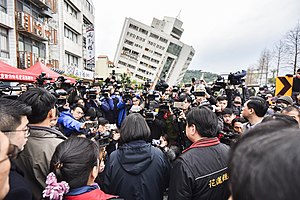 Many buildings in the city of Hualien were damaged, including four that had partially collapsed or were damaged severely. The lower floors of the Marshal Hotel collapsed, killing two people. Several deaths were also reported from the Yun Men Tsui Ti residential building, which was tilted severely due to the collapse of some of the lower floors, with 7 of its residents still reported missing as of 8 February 6:30 PM local time. Large beams were placed by cranes on one side of the buidling in an effort to prevent further tilting during the continuing rescue efforts.[7] Authorities stated there were 274 injured and 11 people dead, including four tourists from mainland China.[7] Many homes were left without water, with bridges and highways remaining closed due to damage from the earthquake.[5]

Hundreds of firefighters and military personnel stayed on site to support efforts to rescue people trapped in damaged buildings.[3]